kade@theatricaldesign.com
I’m on Facebook and have an official listing on IMDb.

He recently completed “A Night for Conversation” – a movie he wrote and directed in 2019.  He created, wrote and produced “Water Stealers“ – an interactive sci-fi video adventure which combines live actors, animation, and put the viewer in control (which won the Platinum: Best in Show Aurora Award for 2004).  He wrote and directed an interactive “Alice in Wonderland” in which the audience followed Alice and the White Rabbit down the rabbit hole – accompanying them on their adventures! 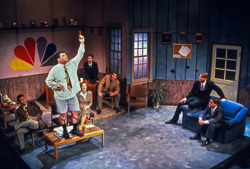